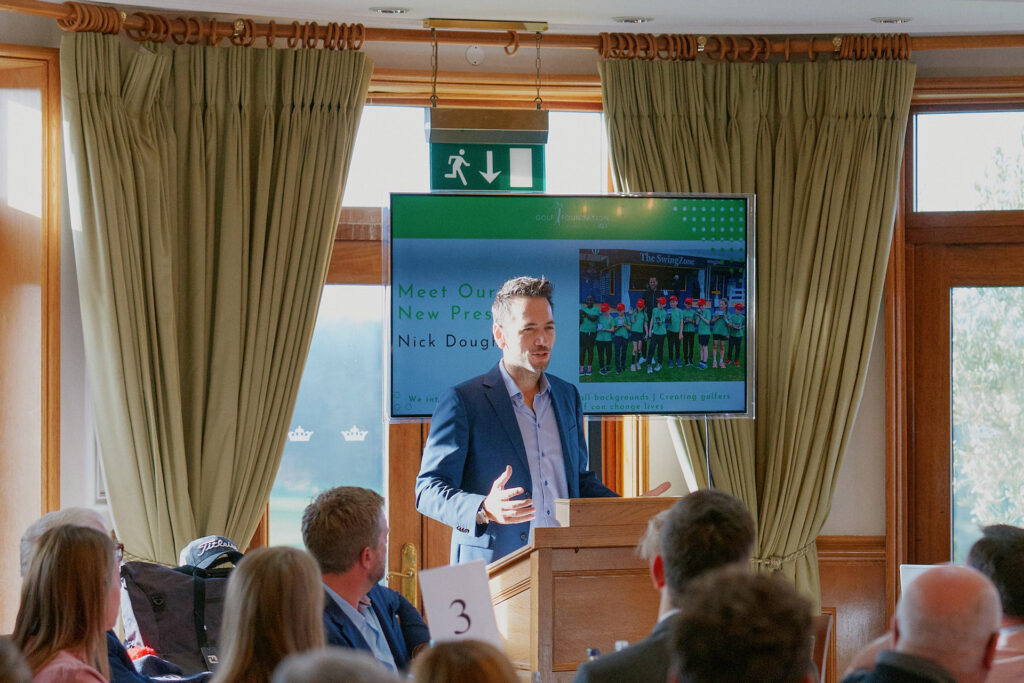 The Golf Foundation has announced the appointment of Nick Dougherty as its new President. The Golf Foundation is a national charity which works in partnership with The R&A and other leading golf organisations to help introduce golf to children from all backgrounds and create golfers for life.

It is the Golf Foundation’s central belief that golf can positively change the lives of young people, a view shared by Dougherty. The former European Tour player and now Sky Sports Golf presenter and analyst was actually supported by the Foundation through coaching programmes in the late 1990s, when he met the charity’s former President Bernard Gallacher, and he has been a strong supporter in recent years.

Nick aligns himself with the Golf Foundation’s core values, that golf should be fun, inclusive, innovative, inspiring and enriching, and has recently appeared at both The Open and the BMW PGA Championship as an unofficial ambassador of the Golf Foundation.

"It is an incredible honour"

Dougherty’s vision now is to help make a significant impact at a junior level, with a particular focus on schools. Earlier this year, he helped the Golf Foundation to create and launch its ‘Golf Is Ours’ school campaign, aimed at getting golf into as many schools as possible.

“I am so grateful for the role that golf has played in my life. From the joy that the game brings to the life lessons that it teaches, I have seen through the experiences of both myself and so many others, the positive impact it can play in people’s lives.

“Introducing it to children when they are young, impressionable and ‘learning the ropes’ of life with its ups and downs, just like the game itself, usually has a profoundly positive effect for them and their futures. Because of this, it is an incredible honour to accept the role of President of the Golf Foundation, an organisation that has been sharing these wonderful golfing gifts for 70 years.”

“The Golf Foundation played a hugely important role in my development as a youngster, and the chance to work with them to support today’s children is immensely rewarding and important to me. I am extremely excited to play my part in helping to reach more children with our sport, to make it more inclusive and, with this shared passion of the Golf Foundation, push to make golf a part of the curriculum in schools so that the benefits of this amazing game are available to all.”

Dougherty’s first official engagement as President came at London Golf Club, where the Golf Foundation was celebrating its 70th anniversary by presenting awards to those who have made a major difference in growing junior golf across the UK. Dougherty, who is the youngest President in the Golf Foundation’s history, congratulated five deserving winners on the day, and shared some stories of his own path in golf.

“It feels like wonderful timing that Nick, who has already been a creative force for our charity, has accepted the role as President,” said Stephen Lewis, Chairman of the Golf Foundation. “We are quite sure his clear passion for golf, and the fun and inclusive way in which he welcomes everyone into the sport as equals, will be a massive help for us in introducing more youngsters from all backgrounds into the game. We are all delighted with this appointment.

“The Golf Foundation has put in a great deal of work in recent years to ensure that all our programmes are relevant to the modern families of today, to show how golf can be a fantastic, inclusive game for all. These are highly exciting times in the growth of junior golf.”

Dougherty will follow recently outgoing President of seven years Sandy Jones, the former Chief Executive of the Professional Golfers’ Association, whose love of the game and his influence throughout golf has done so much for the charity – and Stephen Lewis was also keen to stress the Foundation’s thanks to Sandy, who served so well as President in his term.

“Sandy has been a long-time supporter of the Golf Foundation,” explained Lewis. “He has always been such a great advocate for our work in bringing a new, younger generation to the sport. We would like to thank Sandy for all that he has done for the Golf Foundation.”

During the celebratory day at London Golf Club, a special School Games festival was held beside the course supported by Kent Sport. The Golf Foundation is working in schools, communities and clubs in its Junior Strategy in partnership with England Golf.

To find out more about the Golf Foundation please visit their website here.