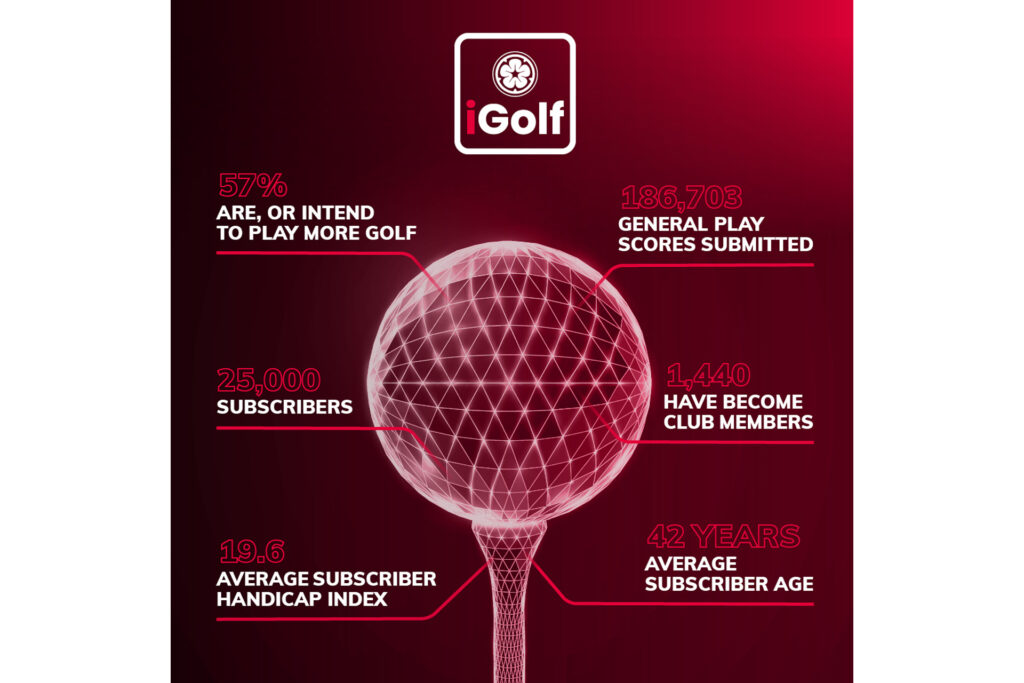 iGolf marks its one year anniversary by announcing they have reached 25,000 subscribers.

The milestone comes as iGolf marks the anniversary of its launch in 2021, with initial data on subscribers highlighting the positive impact iGolf is having on the game nationwide. During the first year, 1,440 subscribers switched from iGolf to club membership, demonstrating how many independent golfers were inspired to play more golf by obtaining an official handicap.

In a recent survey* conducted with iGolfers, 57 per cent stated they have played or intend to play more golf since subscribing, with 60 per cent admitting they are considering joining a club in the future. Over three-quarters of subscribers (77 per cent) are very likely or extremely likely to renew their iGolf subscription.

At a time when overall participation in the sport is increasing and the number of golf club members in England has grown to 737,000 – a rise of 90,000 (14 per cent) since February 2021 - the appetite for non-members to get out on the course has been further proven by iGolfers submitting over 186,000 general play scores.

Encouragingly, 98 per cent of iGolfers are completing 18-hole rounds, with 70 per cent regularly using the driving range.

These statistics reinforce the initiative as a means of connecting with a passionate section of the golf community who may not have previously engaged with England Golf.

“This first year has been a fantastic success for the iGolf platform. Hitting our ambitious target of 25,000 subscribers in 12 months is a testament to the great work the whole team has put in and confirms our belief in engaging with the independent golfer community. We’re really pleased to be providing an excellent service that is clearly in demand.

“The data we have gathered shows that iGolfers have been encouraged to play more golf since subscribing, which is the primary aim of the initiative, and something that we feel will have a positive impact on the entire golf community. Couple this with the fact that we have already seen subscribers move into club membership, it’s clear that iGolf has had a very successful inaugural year.”

iGolf to provide a better platform

Looking to build upon this momentum into its second year, England Golf is set to develop the iGolf offering to provide an even better platform and encourage more golfers, to play more golf, more often. This includes increasing the benefits available to new subscribers, additional offers and opportunities for existing iGolfers, as well as updates to the My EG app that will enhance functionality and the user experience.