History is made at Faldo Series Europe Grand Finals 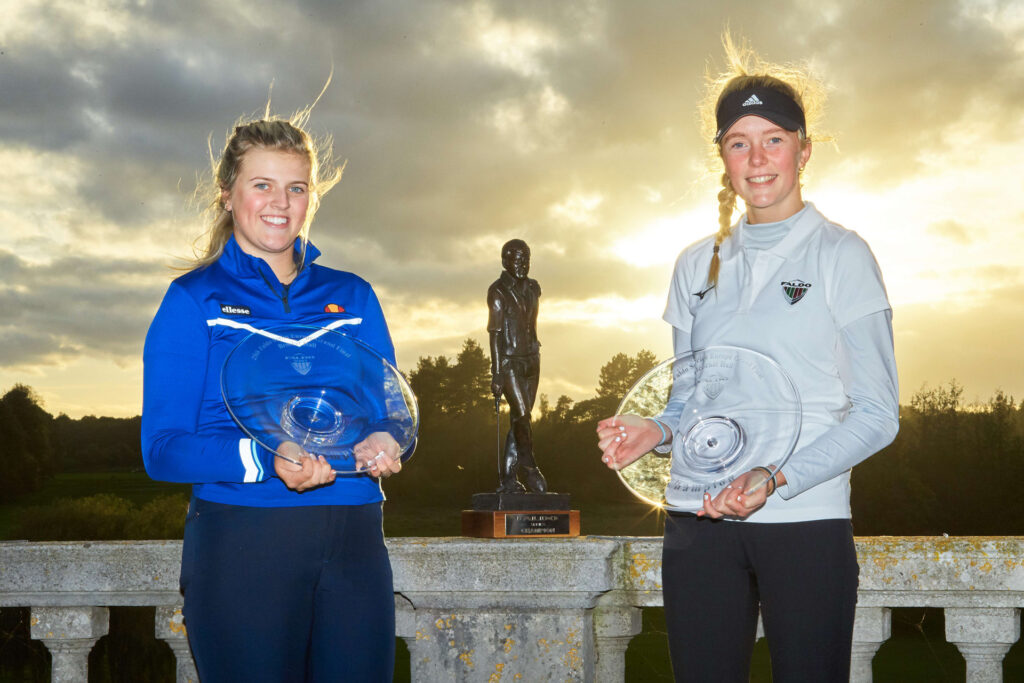 Future stars of the women’s game, Patience Rhodes and Faye Wheatley, rose to the top this week with respective wins in the 24th and 25th Faldo Series Europe Grand Finals.

The marquee event invited 65 of Europe’s very best, aspiring Tour professionals to compete at Brocket Hall’s Melbourne Course for one of the most respected trophies in the junior game.

Doubling the atmosphere, the Series hosted its 2020 and 2021 season finale simultaneously, following the postponement of last year’s event. Adding to the occasion, the event coincided with the Faldo Series’ 25th anniversary celebrations, a significant milestone for Sir Nick Faldo who formed the Series to develop tomorrow’s champions and grow the game.

Two finals in one!

“This is amazing to finish the week as champion in a really competitive field. I really felt like it was won and lost on the greens this week. They ran true and fast so I knew if I could putt well I’d be up there at the end of the week, and that’s what I did. I putted great and almost treated it like a putting competition because the greens were that tough. To come through qualifying and be at such a big event like a Grand Final was quite surreal at times, and I really didn’t expect the week to go as it did. I’ll continue to work hard on my game as one of my biggest goals for next year now is to come back and defend my title.”

A successful year for Rhodes

Rhodes, who won the English Girls’ Open in July, reiterated a drive for further success with the Series after her win, saying:

“It’s just a great feeling to be the 24th Faldo Series Grand Final champion. At the start of the week my goal was simply to win the Under 16 category, and suddenly I found myself stood on the 18th on the final day winning by two. I still went aggressive on 18 with my 5 wood as I wanted to make a birdie to be sure of the win. From here my drive to get better, hit it longer and win consistently won’t stop. I’ll practice hard in the off season to prepare myself fully for the next Faldo Series season and I can’t wait to get started with qualifiers again.”

Both Rhodes’ and Wheatley’s wins earn them an invite to the Faldo Series Asia Grand Final in 2022, where they will get to compete against top-performing juniors across the world. Further building on the unique competitive opportunities for the winners, both the juniors will also be offered a start position on a professional Tour event in the 2022 LET or Access Series schedule.

Joining the overall champions, age category winners from the tournaments also earn a coveted invite to the Asia Grand Final, hosted at Laguna Lang Co in 2022. In the 24th championship, Jamie Van Wyk (Boys U21), Ben Loveard (Boys U18) and Reis Suart (Boys U16) completed the winners circles. They will be joined by their 25th championship counterparts, Sam James Potter (Boys U21), Lucas Martin (Boys U18), Ben Bolton (Boys U16) and Nicola Slater (Girls U21).

Support from The R&A

With The R&A’s support from day one, the Series has provided equal opportunities for Boys and Girls to compete, and its commitment to inclusivity is shown through the success of its Girls category, with, now, six out of the last eight overall Grand Final champions crowned, from around the world, coming from the Girls category.

The Series further strengthened its support for equal and diverse opportunities by pledging their support to The R&A’s Women in Golf Charter in 2020.

“The return to the Grand Final was well worth the wait, and we are truly grateful to Brocket Hall who have allowed us to make this happen. It is brilliant to be able to offer the opportunity to last year’s winners, and although under different circumstances to our usual Grand Final venue in the Middle East, it is in many ways fitting to bring the Grand Final back to just down the road from where Dad played his golf and began his own golfing career.

“So, to see it come in full circle, it’s inspiring to see the players start their own golfing careers from here, and a huge congratulations to our winners, Faye and Patience. They both showed something very special to post such competitive scores out there, and demonstrates the quality of the players as well as the excitement around the Girls game right now, something the Series has long championed. We can’t wait to welcome them back to the Series, in Asia, and support their progression.”

For more information on the Faldo Series go to www.faldoseries.com