Celebrations for the 80th Anniversary of the Greenlees Trophy 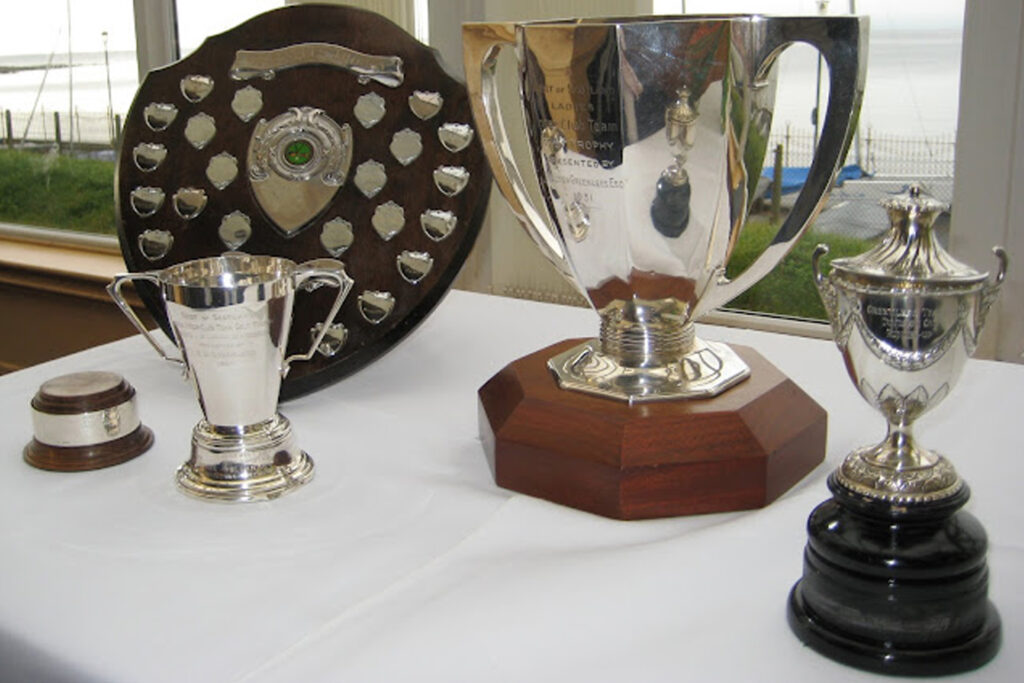 On Tuesday, August 31, East Renfrewshire Golf Club was delighted to host the Tri-Am event and lunch to celebrate the 80th Anniversary of the West of Scotland Ladies Inter-Club Leagues that compete for the Greenlees Trophy.

Seventy-two ladies from 25 different golf clubs in the West of Scotland were represented, with all teams ideally having a player from each of the three divisions.

The weather was calm and mild, with the sun appearing intermittently, resulting in almost perfect playing conditions. The golf course was at its best, having recovered its lushness after a long dry July.

After their round, everyone enjoyed a lovely lunch in the club lounge which had been decorated with balloons and bunting and were able to chat and catch up with old friends.

“I hope you have all enjoyed playing East Ren in perfect golfing conditions and had fun with the bendy driver and left-handed putter on 18th. Watching on, there certainly seemed to be a lot of laughter, there were even several offers to buy the putter.”

Val Crawford who organised the day’s event had left information leaflets on the history of the Greenlees. What most wouldn’t have probably known was East Renfrewshire’s involvement.

East Renfrewshire and the Greenlees Trophy

They were invited to take part in the Greenlees Trophy in 1952. It took them four years to win the second division and were then promoted to division one, where they stayed until 1965. The ladies of the day were obviously not satisfied with the demotion and promptly won Division two in 1966 followed by Division one in 1967 where the team remained until 1976.

There was more success in winning division 2 in 1978. Since those ‘glory days’ East Renfrewshire has had experience of all three divisions taking advantage of playing at a variety of great courses over the years.

We’re told that no matter which division a team is playing in or wither a player is number one or number nine or even seven, when they represent their clubs in a Greenlees match, they do it with pride and great determination to get that point for their club.

The prizes were then awarded by Carole, with Val Crawford, the club’s Greenlees Secretary announcing the various winners.

A final vote of thanks was given by Maureen Mitchell, West of Scotland Greenlees Convenor.

Prizes were awarded to:

This report was written by Val Crawford – you can read the full report here.

Thanks to Carol Fell for providing us with all the information about the 80th Anniversary of the Greenlees Trophy. You can follow her regular blog Ladies Golf News in Scotland, the West of Scotland and Renfrewshire here.

Find out more about the Greenlees Trophy

What is the Greenlees Trophy?

The Greenlees Golf Trophy is competed for annually by the member golf clubs of the West of Scotland Ladies Inter-Club League. The league has three divisions, currently of nine clubs each, and each club team comprises nine players. It is a match-play competition where handicaps are ignored, and game points are gained by clubs. All the clubs are affiliated to Scottish Golf.

Ysobel Greenlees became West of Scotland Ladies Champion in 1932, and became a regular member of the Scottish Ladies Team. She was a leading member of the first-ever international British Ladies Team which toured Australia and New Zealand in 1935, playing en route in India; and captained Britain playing France in 1938. From 1939, due to World War II, the League was suspended for ten years until 1949, when Troon won. She advertised in the Glasgow Herald inviting more clubs to join in, which created a second division in 1954, and a third division followed in 1986. She was a vivacious, powerful golfer, and when playing in the Open competitions newspapers reported “her golf gives more aesthetic pleasure to the spectator than any other of the competitors.”