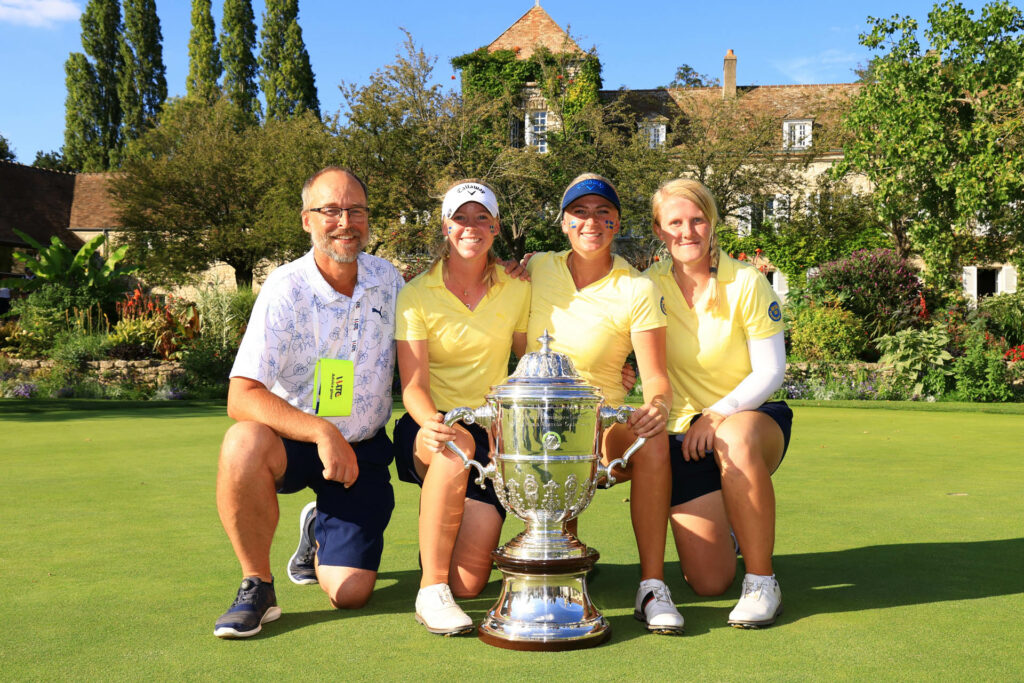 Sweden won the Espirito Santo Trophy for the third time on a tiebreaker over the hard-charging USA at the 29th Women’s World Amateur Team Championship at Golf de Saint-Nom-La-Bretèche on Saturday.

The Swedes and Americans tied at 13-under-par 559 but after comparing non-counting scores, a one-over-par 73 from Sweden’s Louise Rydqvist was one stroke better than Rachel Kuehn’s 74 giving Sweden the gold medal and the USA the silver. One stroke behind at 560, Germany and Japan tied for the bronze-medal position.

Ingrid Lindblad, ranked number two in the world, fired a three-under-par 69 and Meja Ortengren added a two-under 70 as Sweden made up five strokes on Germany, who held the 54-hole.

“Yesterday we were on our way to good scores (at Le Golf National), and we lost everything in the end,” said Sweden’s head of delegation Fredrik Wetterstrand. “Today, everything went our way, our scores and the other team’s scores. I admit it was a little lucky today. Our team played really well. They were fighting hard on the course, and they did it together”

In winning its first medal since capturing bronze in Turkey in 2012, Sweden rebounded from a disappointing fourth-place position in Round 3 after holding the 36-hole lead.

“I knew pretty much all day that I had a counting score,” said Lindblad. “We knew that after yesterday at Le Golf National we would have to go for it whether we finished second or 14th. Meja made about a seven-footer for par on the 18th which was so important for us. That was great.”

The USA, which began the day four strokes behind Germany, battled its way to a one-stroke lead on the tee of the 72nd hole after a birdie on the 17th by number one ranked Rose Zhang.

Zhang, a member of Stanford University’s 2022 NCAA Women’s Division I Championship team, missed the green with her approach on 18 and could not convert a par-saving putt that brought on the tiebreaker. She finished with a three-under 69 and Stanford and USA Curtis Cup teammate Rachel Heck shot 70.

“There is obviously that tinge of disappointment,” Zhang said. “On that last putt, I actually hit a really good putt exactly where I wanted but it just didn’t go in the hole. It was disappointing to end that way, but I am really proud of how we fought back on the last day.”

Germany could not find its form of Round 3 and posted a fourth-round 145 leaving them tied with Japan, who held a short-lived lead early in the round based on a four-under 68 from Mizuki Hashimoto, the 2021 Asia Pacific Amateur champion. Teammates Saki Baba, the 2022 U.S. Women’s Amateur champion, and Mika Ueta both shot 70.

Helen Briem led Germany with an even par 72 and Celina Rosa Sattelkau shot 73.

“It wasn’t our day, but the girls kept fighting,” said Germany captain Pia Gassner, who played in the WWATC in 2008 and 2010. “It was so close that we knew we needed to make birdies, but we just couldn’t make them. We didn’t lose the gold today; we won the bronze.”

Spain, who held a late lead, was fifth at 561, Chinese Taipei was sixth at 566, Canada and Scotland tied for seventh at 570 and the Czech Republic and the Republic of Korea tied for ninth at 572.

Although there is no official recognition, Sweden’s Ortengren, Germany’s Briem and the USA’s Zhang tied for the low individual score at seven-under-par 279.

72 teams will compete in the 2022 World Amateur Team Championship for the Eisenhower Trophy at Le Golf National and at Golf de Saint-Nom-La-Bretèche from 31 August-3 September.