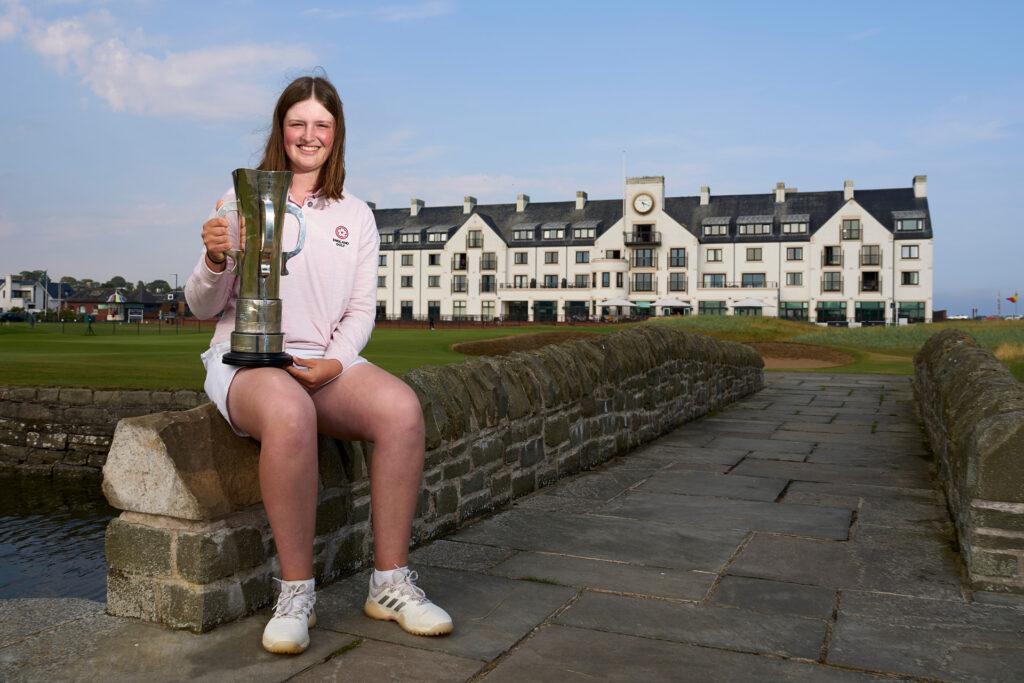 Lottie Woad and Albert Hansson were crowned R&A Girls’ and Boys’ Amateur champions on a historic day at Carnoustie.

Woad was six-under-par for her 12 holes in the afternoon to ease to victory, while Hansson fought back from three down with eight to play to triumph.

It was a day for the history books over the famous Angus links as the finals were played alongside each other for the first time. In another first, both finals were also live streamed on The R&A’s website at www.randa.org as well as on The R&A YouTube channel.

Hansson, 18, who attends the same school in Helsinborg as Ringvall Bengtsson, joins a roll of honour that includes Matt Fitzpatrick, Sergio Garcia and Jose Maria Olazabal and is the first Swedish winner since Marcus Svensson in 2015.

The conclusion to the Girls’ Amateur, played over an Open venue for the first time this week, began in overcast conditions with little breeze. But Woad and Fernandez Garcia-Poggio, both ranked inside the top 100 in the world, were soon shining on the links.

Fernandez Garcia-Poggio, 17, made the first move in the morning round, winning the 4th with a birdie three. Woad’s excellent eagle three drew her back level at the 6th and a lovely birdie at the short 8th took her to one up.

The English girl – winner of the Sir Henry Cooper Masters this year and a victor with England women at the European Ladies’ Team Championship and the Home Internationals – cemented her lead at the par-3 13th when a poor chip from Garcia-Poggio from behind the green left her with too much to do. Woad maintained her steady play finding fairways and greens and matched her Spanish opponent’s birdie four on the 14th to stay two up.

A cold putter wasn’t helping Garcia-Poggio and she narrowly missed birdie putts on the closing three holes which might have reduced the deficit as Woad stayed two up going into the afternoon round.

Fernandez Garcia-Poggio, the Spanish Ladies’ Amateur winner this year, bogeyed the 19th to allow Woad to go three ahead but her birdie at the 21st clawed one back. Woad, though, then produced a brilliant run of three birdies in a row from the 22nd thanks to brilliant approach play and moved to four up after the 24th.

The Spaniard found trouble with a bad lie in the fairway bunker on the 27th and Woad moved a commanding five up. The England internationalist, who plays off +7, finished in style with a further run of three straight birdies from the 28th.

Woad, who came out on top of a 144-player field, secures exemptions into the Women’s Amateur Championship, the US Girls’ Junior, subject to age eligibility, AIG Women’s Open Final Qualifying and, by tradition, an invitation to the Augusta National Women’s Amateur.

On her win, Woad said:

“I thought it was going to be close after the morning round but I got a few good birdies and holed some putts to give me some more breathing room in the afternoon. I didn’t really miss a fairway in both rounds and was hitting approach shots close to make the putts.

“We both played well so it perhaps looks a bigger win than it was, as we did exchange birdies. There was no real wind so it was perfect. It’s amazing to add my name to the trophy, I can’t believe it – it’s great.

“Winning the gold medal at the Europeans with England was the highlight of my career but this might top it now. It’s been a good year with a busy run of events. I’m glad to finish it off with victory in I think my last junior event.

“I wasn’t really thinking about the exemptions to come, but instead focused on the match play. My dad has been here the whole week and we’ve got family in Edinburgh who came to support me too.”

It was a close contest in the Boys’ Amateur final, between two players who share the same accommodation at school and have played together for much of their junior days.

Hansson and Ringvall Bengtsson (18) shared four birdies in their opening six holes. Hansson, from Skaftö, birdied the first two holes but his countryman replied with birdies at the 4th and 6th as a tight match remained all square through 13 holes.

A superb eagle from Hansson at the par-5 14th gave him the lead once more and he restored his two-up advantage after Stockholm’s Ringvall Bengtsson failed to get up and down with his chip from rough at the 15th. Over Carnoustie’s difficult closing stretch, Hansson bogeyed the long par-3 16th to go back to one up and they exchanged holes at 17 and 18 to leave Hansson one hole ahead at halfway.

Hansson bogeyed the 19th as the match returned all square before Ringvall Bengtsson surged ahead. He made a remarkable five birdies in six holes from the 20th to go three up after the 26th as Hansson could only reply with two birdies over the same stretch.

But, in a see-saw tie, Hansson refused to be beaten. He birdied the 29th before Ringvall Bengtsson found trouble at the next to concede the hole and suddenly there was only one hole in it. Hansson’s birdie at the 33rd and his opponent’s bogey at the long par-3 34th saw Hansson go ahead. A par was then good enough for his comeback success at the 35th, as the finalists played the afternoon’s 17 holes in only two hours and 40 minutes.

Hansson, the winner from a 252-player field, earns exemptions into The Amateur Championship, US Boys’ Junior, subject to age eligibility, and The Open Final Qualifying. On the day Ewen Ferguson – the 2013 Boys’ Amateur winner – won the ISPS Handa World Invitational on the DP World Tour, Hansson will have another illustrious example to follow.