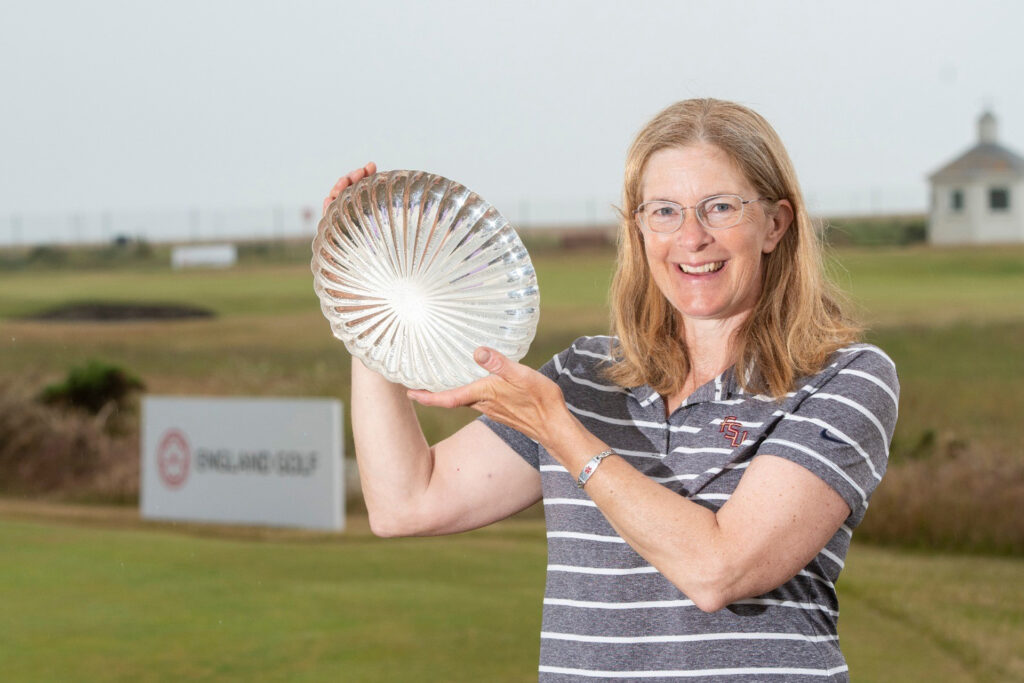 Tracey Williamson held her nerve during a tense closing stretch to claim a wire-to-wire victory in the English Senior Women’s Stroke Play Championship.

With daughter and England women’s squad member Amelia on the bag, it was an emotional win for Norfolk golfer Tracey Williamson after three previous attempts to land the English Senior Women's Stroke Play trophy ended in near misses.

She now adds the English Senior Women's Stroke Play to her Norfolk Ladies' County Championship title which she won for a record ninth time in May.

Williamson started the final round of the championship run by England Golf with a five-shot lead over Ireland’s Laura Webb after rounds of 71 and 72 left her on five-under-par through 36 holes.

By the time the leading duo reached the turn at Hayling Island Golf Club, Williamson’s advantage over the two-time British Seniors’ Champion was still a healthy three shots.

But after Williamson found trouble and carded a double bogey seven on the 14th hole, the final pair found themselves locked together on two-under par for the championship.

To Williamson’s credit she dug deep to make a brilliant birdie two on the 16th hole while Webb endured the agony of a three-putt bogey.

The final round turning point

That two-shot swing proved to be a critical point in what had essentially turned into a match play tie within a stroke play format.

After both golfers birdied the 17th hole, Williamson held a two-shot lead playing the last.

Both players found trouble off the tee and were forced to take penalty drops, but Williamson was able to steady herself and emerge victorious after a day which became a little more troublesome than she would have liked.

A final round 77 got the job done for Sheringham Golf Club's Williamson, with a laugh after her round she said:

“It was very much a tight squeeze. I did enjoy it, but it was a little bit tense.

“Some of the bad shots came out of the blue. I wasn’t nervous and thinking about an off shot – they just appeared."

Trying to keep nerves and tension at bay

Williamson had played near flawless golf all week. Twelve birdies in her first two rounds showcased both her iron play and her putting stroke.

In the end, her tactic of trying to relax and not think about the finishing line paid dividends.

With a triple bogey seven at the last as she tried to force the issue, Webb’s round of 75 left her in a tie for second place with Fiona Edmond and Caroline Berry. Berry’s three-under par round of 71 was the best of the day.

The Irish women’s team captain was bitterly disappointed that she couldn’t quite get over the line having fought so hard to peg back the leader. Webb confirmed:

“I played reasonable stuff, hit some good shots and good putts and it just didn’t happen. I’m disappointed that I missed a putt on the 18th too and even more disappointed with my drive which put me out of it.

“But many congratulations to Tracey for her win.”

In the handicap section of the championship, Hayling Ladies Golf Club member Alison Holland took the honours with a 36-hole net total of three under par.

The prize for the over-65s, the Christine Willis Salver, was won by Christine Quinn from Hockley Golf Club.