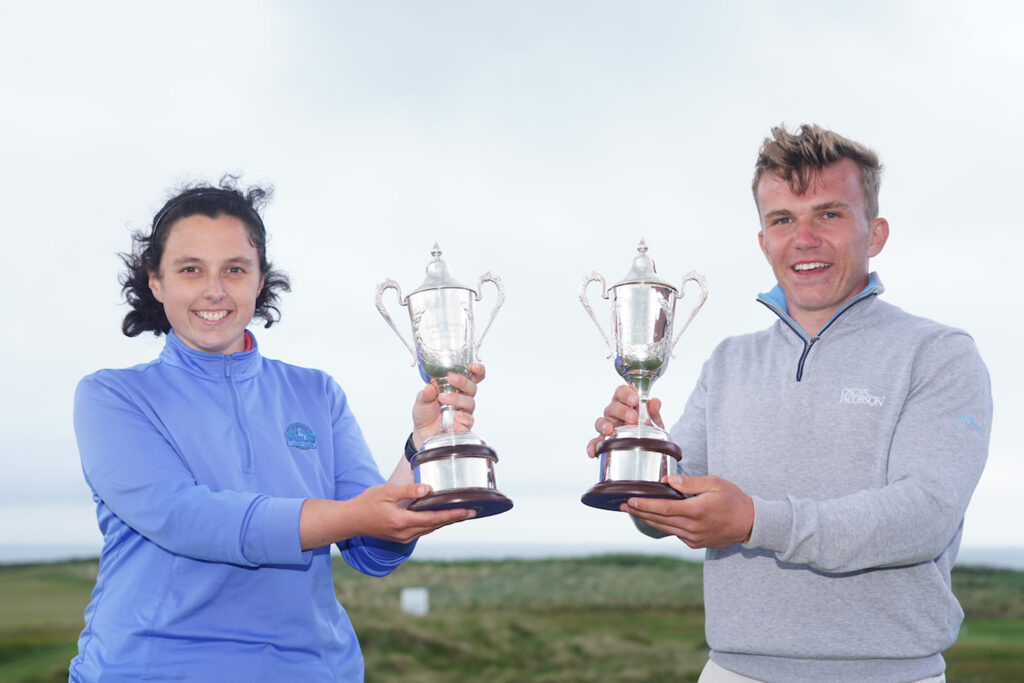 The 54-hole ISPS Handa Stroke Play event came right down to the wire for the men as overnight leader Rowan Lester (Hermitage) and Moran needed an additional 3 hole play-off to separate them.

Moran, who arrived at 3am the night before play began having travelled from the St. Andrew’s Links Trophy in Scotland, shot a final round 69 to force the play-off. He said:

“I’m just delighted, I kind of went out with no expectations, I was 7 shots behind the leaders but on this golf course you never know what’s going to happen, it’s so hard. When I finished, I didn’t know what was happening but then I saw the scores and got a little excited.”

The 21-year-old is studying Business at the National College of Ireland but will be studying how his game compares to the world’s best as he tees it up in the ISPS Handa World Invitational next month. Moran is excited, he said:

“To get an opportunity to play at the World Invitational, especially as it’s at home in Ireland, is something I’m really excited about. Hopefully there can be spectators so my friends and family can come but I’m looking forward to seeing where my game’s at and giving it a rip.”

Walsh had a somewhat less stressful finish as she closed out an 8-shot win over Jessica Ross (Clandeboye).  She commented:

“I’d a few birdies to start and was 3-under for the front nine. So, I just tried to continue that on the back, and I finished well. I can’t believe the win to be honest.”

Walsh took a 1-shot margin into the final round and her focus throughout the day was to stay present.

“My coach text me and said it’s just another round of golf and that’s all it was, I tried to stick to that while I was playing and not get ahead of myself.”

While Walsh has won the Women’s Interprovincial Matches with Munster and the Women’s Senior Cup with Lahinch, this is her first individual win. After her win, she said:

“It's a bit mad to be honest I never thought I would win of these I just sort of played in them, but I can’t believe it. It is different alright not having the team around you but it’s still unbelievable.”

Walsh will join Moran and Lester in the ISPS Handa World Invitational at Galgorm Castle and Massereene from July 28 – August 1. The unique global event is part of the European Tour, LPGA Tour and the Ladies European Tour schedules and promises to attract some of the best players in the men’s and women’s game.