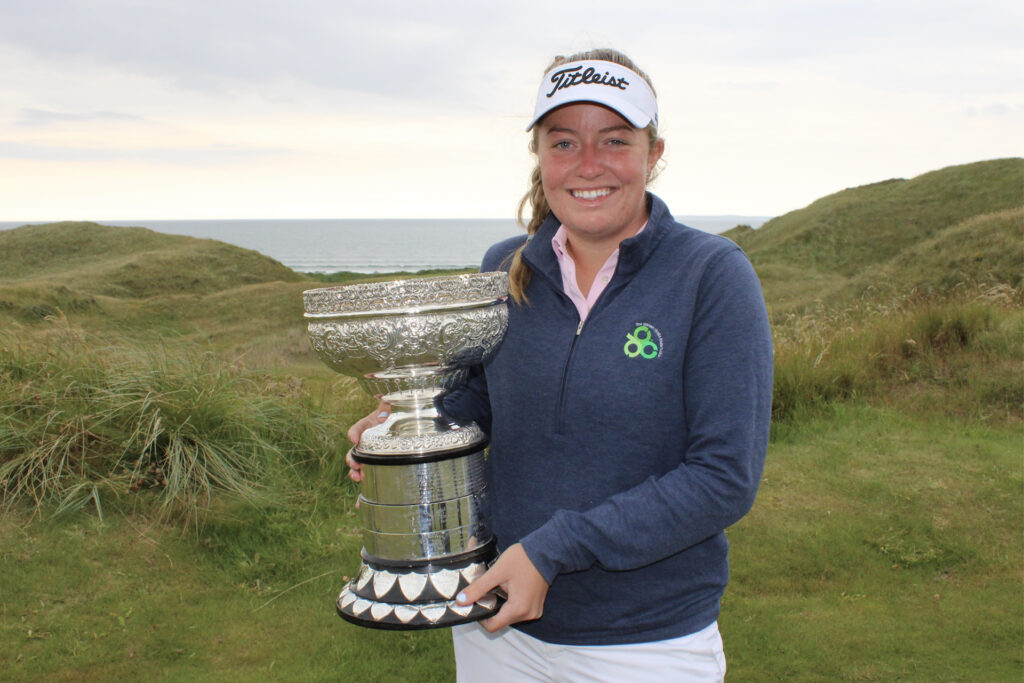 The Elm Park golfer never trailed in Sunday afternoon’s decider, and started in the best possible way winning the first hole. In a tight final, the following five holes were shared, before Coulter levelled the match on the 7th hole.

Foster regained the lead on the following hole, and extended it on the 10th. She would eventually wrap up the title on the 17th hole.

The Auburn freshman was still in shock to get her hands on the historic trophy, she said:

“It still hasn’t sunk in. I’m so happy. The whole week was about taking one shot at a time, and I never got ahead of myself from Thursday morning. It was all about staying calm and present.

“I wasn’t worried about how I played on Thursday, as long as I made the cut. After that, I saw I was in the bottom-half of the draw, and it was all about quietly progressing. I was happy to glide through to today’s Semis.

“I knew the Final with Beth was going to be very tight, so winning the first hole was a big plus. Beth is a brilliant player, so it was about hanging in and then being able to build on the lead.

“I’m delighted to add my name to the trophy. It’s a pleasure to have it there with the likes of the Maguire twins and Olivia Mehaffey.

Beth Coulter won Leading Qualifier honours, but was still disappointed to lose out in the decider. She said:

“I played really well in the Semis and holed everything. I probably used all my putts up in that match. Nothing would go in, in the afternoon, but I’m delighted for Anna. She deserved it.

“Coming into the week, my expectations weren’t too high. I put a lot of hard work in, in the past few weeks. I’m delighted it’s starting to show though."

In the morning’s Semi-Finals, Foster ended the fairytale run of 13-year-old Olivia Costello, with a comfortable 6&5 win, while Coulter defeated Shannon Burke 3&1 with a brilliant putt from off the 17th green.