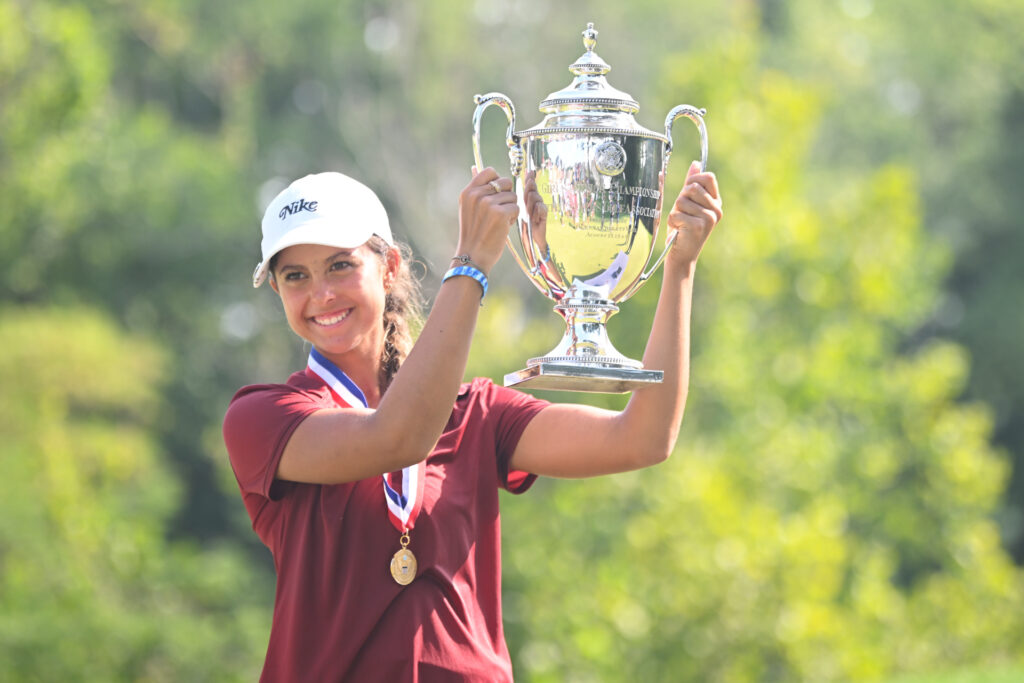 A week after Yana Wilson went 3-0 in the American Junior Golf Association’s Wyndham Cup in leading the West to a resounding victory, the 15-year-old from Henderson continued her recent unblemished mark in the head-to-head format by capturing the 73rd U.S. Girls’ Junior Championship at The Club at Olde Stone with a 3-and-2 victory over Gianna Clemente, 14, of Estero in Saturday’s 36-hole final.

Wilson, a quarter-finalist in last year’s U.S. Girls’ Junior, went 6-0 in match play over the four days in extreme heat and humidity to add her name to the pantheon of legendary champions who have etched their names on the Glenna Collett Vare Trophy.

A place in the U.S. Women's Open

“It means a lot,” said Wilson, a two-time 12-13 age-group Drive, Chip & Putt champion. “Today I looked at the boards that [the USGA put up] walking up to hole 1, and I saw a lot of the girls who won the U.S. Girls' Junior had won the U.S. Open, and they have really just become legends. Hopefully one day I can join them.”

The rising high school junior has already built quite a résumé, including a walk-off victory over Anna Davis to win the Annika Invitational in Orlando earlier this year when she holed a 75-yard wedge shot on the first play-off hole. That made Wilson 10 of 11 in playoffs, a statistic she said has made her a tough out in match play.

“Honestly, I try not to get affected by little things,” said Wilson, “and I feel like sometimes the opponents that I play against are really fiery, and if stuff doesn't go their way they get upset. I feel like I'm just a very steady player.”

An impressive performance from Wilson

No more so than in the afternoon of the final. Trailing one-down on the 26th green, Wilson had a golden chance to tie up the match, but badly pulled her putt. But she didn’t let the setback affect her attitude. And on the next hole, a par 5, she two-putted from 50 feet for a winning birdie. When Clemente failed to get up and down for par from a greenside bunker at the par-4 28th hole, Wilson took the lead for good. Down the stretch, she converted several putts of 6 feet or less to tie or win holes.

Clemente, who in 2019 became the third-youngest player to qualify for the U.S. Women’s Amateur, never got her putter going. At least not like Friday’s semi-final when she converted eight birdies in an impressive 6-and-5 win over Maria Jose Marin, of Colombia.

“I think I definitely need to do some putting work,” said Clemente. “But I did play well. I can't complain about winning five matches. Just need to move on to the next one. I'm going to go home and rest and prepare for the [U.S. Women’s Amateur in a couple of weeks].”

When the match concluded, Wilson, with a small group of supporters made up mainly of the grandchildren of two-time U.S. Senior Open champion Kenny Perry, was doused by water before being handed the trophy and awarded the gold medal in a ceremony on the green.