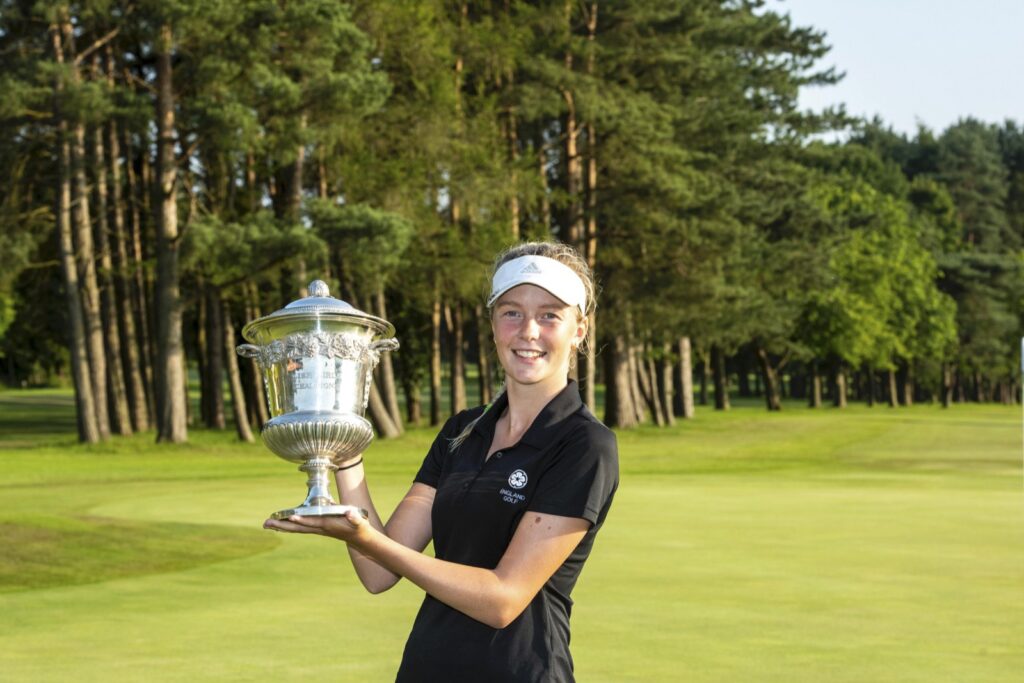 The England squad member showed no signs of fatigue on a day when the competitors finished the 72-hole event by playing 36 holes in hot and breezy conditions at Malton and Norton Golf Club in Yorkshire.

In fact, it was the 17-year-old golfer’s ability to stay mentally focused and birdie two of the final five holes that allowed her to claim the silverware.

Playing in the second last group and knowing that 14-year-old Rosie Bee Kim had set the clubhouse lead at one over par, Rhodes signed for a two-under par round of 70 to win by a shot.

Birdie threes on the 14th and 15th holes edged the Burnham and Berrow member ahead of Kim who was left to rue a bogey on the closing hole.

However, Buckinghamshire’s Kim could not have done much more to try and win the title after carding consecutive one-under par rounds of 71 to conclude a fine championship and underline her potential as one of the country’s top talents.

Rhodes, though, was a worthy winner after rounds of 73,72,73 and 70 allowed her to claim her first national championship on level par.

Halfway leader Olivia Lee couldn’t quite make it a birthday week to remember as she closed with rounds of 74 and 77 to finish fifth.

After being presented with the trophy by England Golf’s president elect Les Wilson, the 17-year-old champion from Somerset said: “It means the world – I’m over the moon, really happy.

“I was pleased with the scores today– my irons were solid near the end which was really needed and I holed the putts near the end.

“For my birdies I firstly hit a four iron and eight iron to about a foot away. I was happy with that as there was not as much stress.

“Then I hit a wedge to a foot and holed that.

“On 16 I holed a long putt to save par and then just parred in.”

The winning putt was no more than a two-footer, but still not easy to convert.

“I marked it and was scared I would miss,” joked Rhodes. “But I was happy in the end.”

Rhodes comes from a golfing family – older sister Mimi also came through the England Golf ranks and has played for both the girls’ and women’s squads.

On her sister’s influence, Patience added: “She hasn’t played here before, but she gave me a lot of support and told me how to play my game.”

Despite the obvious disappointment of falling just short in the main event, there was some consolation for Kim when she deservedly won the Hazards Salver for the top performing under 16 in the field.