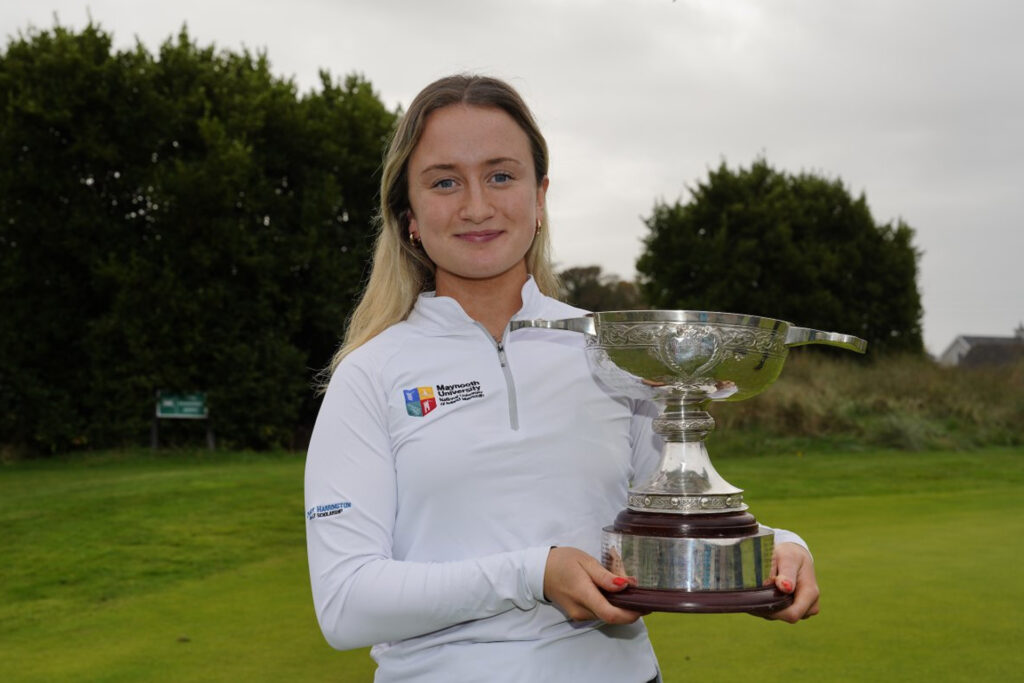 Kate Dwyer makes history as the first female winner of the Irish Intervarsity Championship in Rosslare.

Maynooth University’s Kate Dwyer made history by becoming the first female winner of the Irish Intervarsity Championship on a thrilling final day in Rosslare.

Dwyer, a fourth year Law student, birdied the last for a hard-fought level-par round of 73 for an overall total of one under for the championship on another day of high winds at the immaculate Rosslare links.

Speaking after her victory, Kate emphasised the importance of the win in attracting more female players to the event.

“It’s absolutely brilliant and I’m delighted. It’s not something I thought would happen coming down to the event but hopefully it’ll inspire the next generation of girls that this is not just a totally male tournament and it might encourage a few more girls to play in future years.”

The weather forecast for the final day had looked ominous, and players had been warned that the day’s play may be interrupted, however levelheaded Dwyer managed to keep her focus throughout.

“We got an email last night explaining that due to the weather conditions the rest of the tournament may not ahead so it’s easy to slip into a mindset that you’re not going to be playing. Today I didn’t want to lay back too much and really just had a bogey avoidance kind of approach which I did! I was just trying to limit damage where possible knowing the conditions were very challenging.”

Her nearest challenger, fellow Maynooth student Ryan Griffin, fought all the way to the end with an eagle three at the 18th to leave him one shot behind Dwyer and the winner of the Men’s Gold Medal.

South Dakota’s James Temple shot a level-par 72, the round of the day, to clinch the Men’s Bronze, just behind Maynooth’s Shane Irwin.

The performances from Dywer, Griffith and Aaron Marshall were enough to ensure Maynooth also won the team category.