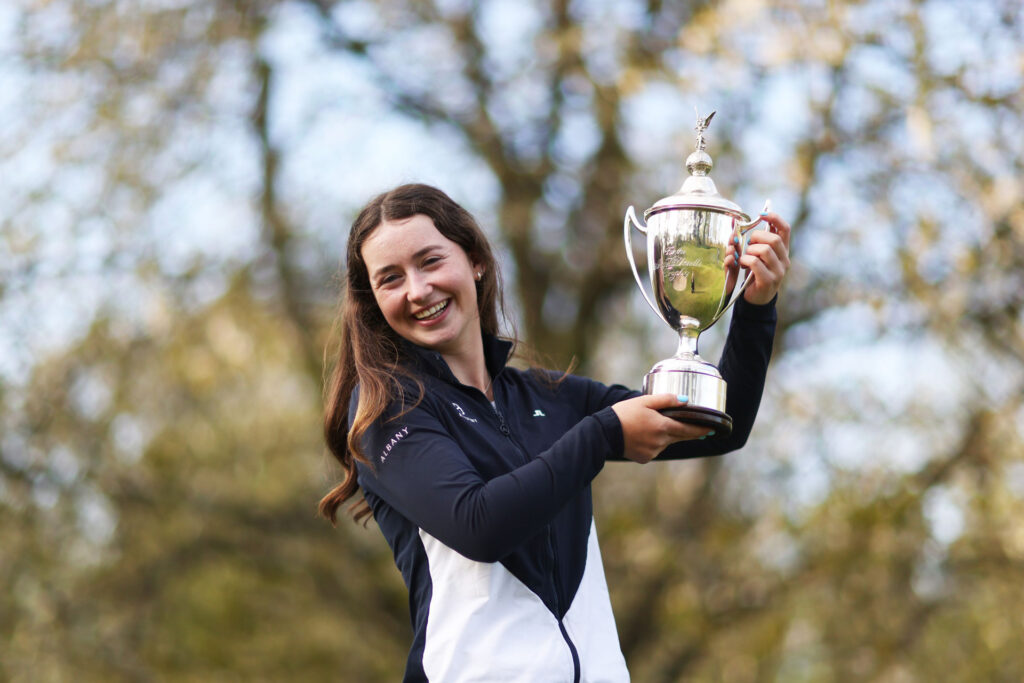 It was back-to-back wins for Grace Crawford as she adds The R&A Girls’ U16 Amateur Championship to Helen Holm Scottish Women’s Open that she won last week.

Scotland’s Grace Crawford secured back-to-back victories after finishing with an eagle to claim a memorable success in The R&A Girls’ U16 Amateur Championship at Enville.

The 15-year-old won last week’s Helen Holm Scottish Women’s Open at Royal Troon and the North Berwick player held off the challenge of Kinga Kuśmierska and Isla McDonald-O’Brien to achieve another notable triumph.

Crawford, making her final appearance in the Girls’ U16 Amateur having first started playing in it aged 12, overcame a difficult start on the final day to roll home a 25-foot putt at the par-5 18th and win the 54-hole stroke play championship by four strokes at the Midlands venue.

Crawford posted a winning total of four-over-par 220 to triumph, closing with a final round of level-par 72. She joins fellow Scot Hannah Darling, Italy’s Francesca Fiorellini and last year’s winner Roise Bee Kim on the championship’s roll of honour.

After her win, she said:

“I feel amazing. I think this is a really special one for me. I’ve played in this championship since I was 12 so it is really nice to finally get the win in my last year.

“I struggled a bit on the front nine, but I was quite patient – I think that was definitely the key. It was an up-and-down round, but I was just enjoying it as this is what we work for. It was fun. Winning last week gave me a lot of confidence coming off of it and I’ve managed to do it again.”

After her own closing eagle, England’s McDonald-O’Brien shared the runner-up spot on eight-over-par with Polish player Kuśmierska. Defending champion Kim surged up the leaderboard with a final round 74 to claim fourth place on ten-over-par, sharing that total with Uma Bergner from Germany.

The top four players gained an exemption into The R&A Girls’ Amateur Championship at Carnoustie in August.

Crawford led by two strokes after 36 holes over Kuśmierska and Lynn van der Sluijs, but after Netherlands player van der Sluijs started with a double bogey on the par-5 first and Crawford also dropped two shots on the third, Kuśmierska held control on the front nine.

Crawford also bogeyed the 4th but timely birdies at the 8th and 12th regained her lead after bogeys from Kuśmierska on the 6th and 12th.

It became a head-to-head with the pair with Crawford’s lead cut to one after another dropped stroke on the 13th. She then restored a two-shot advantage with a key birdie on the 15th.

After Kuśmierska bogeyed the 16th and 17th, it was McDonald-O’Brien who pushed into a tie for second spot thanks to her efforts on the last as Crawford also finished in style for victory.

Crawford, who is on a golf scholarship at Albany Academy, added:

“To hole the putt on the last was pretty special as well. This win is very high up in my career. It’s such a good event for us and I’m going to be sad to miss it next year, but I’m really happy to get the win.”

Van der Sluijs finished 11th after a closing 79 for 13-over-par, the same mark as Estonia’s Elizaveta Sofia Reemet, the second-highest ranked player in the field. Austrian Maja Dultinger highlighted her final day with a hole-in-one at the 131-yard 14th en route to finishing 72nd.

John Uzielli, Past Captain of The Royal and Ancient Golf Club of St Andrews, was at Enville to present the Angela Uzielli trophy to Crawford. The trophy was named after his late wife Angela, a decorated amateur golfer, including representing Great Britain and Ireland in the Curtis Cup in 1978.

The championship was introduced as part of The R&A’s drive to boost the girls’ game in Great Britain and Ireland and beyond, as well as to provide a pathway to the elite amateur level for leading young players.

Founded in 1935, Enville is one of the finest examples of heathland golf, with the field of 88 players competing in the rescheduled championship over the last three days.