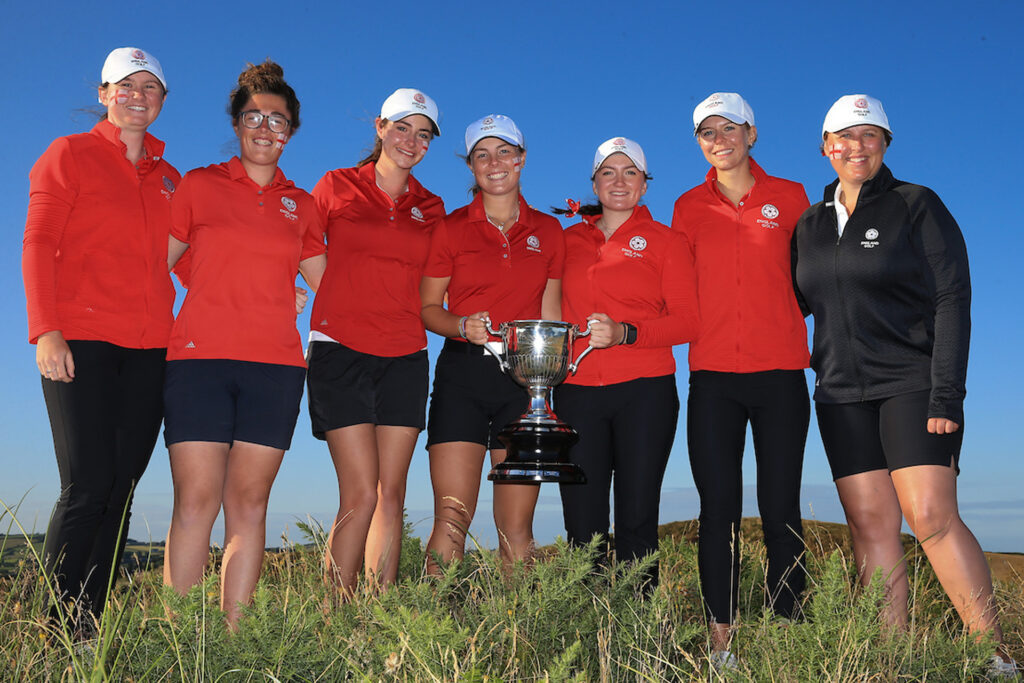 England have won the European Ladies' Team Championships at Royal County Down, overcoming tournament favourites Sweden in the final on Saturday.

The England team featuring Emily Toy, Lianna Bailey, Annabell Fuller, Rosie Belsham, Charlotte Heath and Caley McGinty entered the final as the underdogs and had to dig deep to gain the edge needed to overcome the formidable Swedidh team. The triumph is England’s 11th in the event’s 62-year history and meant that it denied the Swedes their record-breaking fourth win in a row at these championships.

A foursomes win in the morning for the partnership of Toy and McGinty allowed the teams to share the spoils and go into the five afternoon singles locked at 1-1.

In the afternoon, Caley McGinty posted the first point in the singles, winning her match 6&5 before Annabel Fuller closed her match out against Ingrid Lindblad on the 17th.

When Charlotte Heath beat Maja Stark 2&1, the four-in-a-row dream for Sweden were smashed and the European title was heading home to England.

“We’re just elated to be honest. It’s been such a team effort from the moment we stepped off the plane until this afternoon.

“We knew coming in that we had a team this year that wanted to win not only for themselves but for each other and I think that’s been proven this afternoon.

“Our strategy today was to go out fighting in those early holes, as we had noticed that we weren’t capitalising on those opportunities and we managed to be up this afternoon through 5 holes for the first time all week. It really was a super match from both sides.”

Speaking after receiving the trophy and sharing the joyous moment with her team-mates, Toy said:

“This is a special moment for all of us. Even though we are brought up to play an individual sport, there is nothing better than winning as a team and winning a title for your country.

“The key to this week has been the team spirit. The camaraderie has been incredible. Every player has contributed to this special, special moment.

“We were all pulling for each other – when Lianna wasn’t playing she was caddying for me and that sums up just how much we were in this as a team. Little things like that make a huge difference.

“We’ve had a great week with a win in the quarters against the Czech Republic getting us into the right frame of mind for knockout games. Coming from 2-0 down to beat Scotland in the semis gave us huge belief.

“Sweden are a really strong team, but we knew that we had a great chance after winning one of the morning foursomes and the team was superb in the singles.”

Ireland who finished in 8th place for the tournament have taken confidence in the fact that four of the six players were making their senior international debut and from qualifying as second seeds earlier in the week.

“This week has just surpassed all expectations, I couldn’t have asked for a better experience. To play at home as well has been so great and we appreciate that opportunity.”

Teams from 19 nations successfully travelled to Royal County Down for the event and, under the current health situation, the opportunity to play such a prestigious competitive event has been appreciated by all involved. England Golf’s Henderson added:

“We cannot thank Golf Ireland, the EGA, Royal County Down and the Slieve Donard enough. From start to finish we have felt safe and secure. All of the teams have been respectful of the restrictions and to have this Championship after the 18 months that we’ve all had has been monumental for all the players who have missed out on so much.”